I am posting some photos of Silver Laughter to show how the band evolved over the time they started on the road. There are many earlier photos with various band members, but since I am not sure of their order I will start with what I know. This first is not a promo pic, but one taken of the group with the same lineup they had when I went to see them right before I joined. 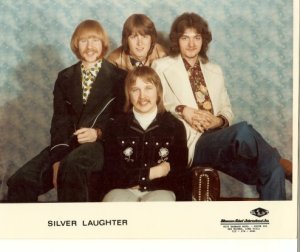 Traveling did not agree with Steve and Denny who both left and Silver Laughter then became a four piece band. We stayed that way until the end.

Traveling was not for Mark either, so less than a year later, he decided to quit and was replaced by Ken Wiles on lead guitar. His band, Ivory Coast had just broken up, when he came to see us play at The Cavern in Moline.

Shortly after Ken joined, we started working on our first album, “Handle With Care”. All the songs were Ludtke – Orton originals. Kim played all the drums and sang vocals on the record, but he decided to go back to school. 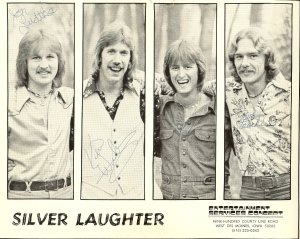 In order to fill Kim’s spot, The Contents Are: drummer, Paul Staack, was recruited in the middle of the sessions and appeared as the voice of the judge on “Whiskey Heaven”.

Silver Laughter toured the Midwest and Canada for over two years with personnel, Jon Ludtke, Ken Wiles, Mick Orton and Paul Staack. Around 1977 the band began working on the second album, “Sailing On Fantasies” which was completed and released in 1978. 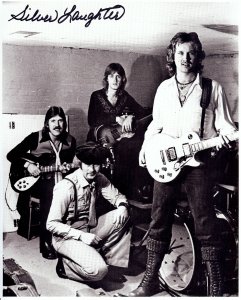 Announcing his departure, Paul left the band, and Kim Ludtke returned for a short time before the band dissolved for good in 1979.