What The Site Is All About – Silver Laughter Music – “Bad News” 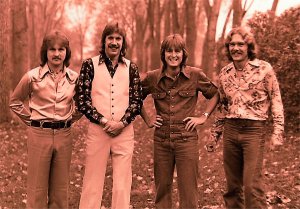 The title of this post suggests that Silver Laughter music is bad news… It’s like the coach saying, “I’ll throw the ball and when I nod my head you hit it.” This is not the case. People from all over the world are finding this site daily, and many are following us with e-mail alerts. Not only that, but our ReverbNation profile is getting several new fans every day.

This cut from our second album, “Sailing On Fantasies” was originally envisioned as being in the same vein as something Little Feat might do. It has great lyrics and an original melody and was born from an intricate bass line. But after years of listening, I don’t think it quite has the groove we wanted. In the future, I may ask The Silvers if we can do another version of it.

Click on the link at the top of the page to hear the song.

The photo is another outtake from the Worthington sessions taken by Art ‘Smart’ Stenstrom, our manager. It has the correct lineup of musicians who played on the second album, although at the time of the shoot we hadn’t released “Handle With Care”, the first album, yet.